Greece is renown for its health giving and delicious food. Not only does the Mani have abundant seasonal fish and locally reared meat, but vegetarians and vegans have considerably more choice than that offered in many other countries. Cooking uses seasonal vegetables using fresh herbs such as purslane, mint, oregano, sage, rosemary, wild chicory, wild greens (called Horta- a regular staple on many a menu).

Mani cooks use certain eastern Mediterranean spices so expect to taste cinnamon, cumin and allspice in dishes. Pulses are on most menus cooked in a variety of ways, favourites include baked giant butter beans in fresh tomato sauce, lentils with spices, black eyed beans and spinach, fava and hummus. These add to a wide choice of their vegetable dishes such as peas and artichokes, green beans in tomato sauce, aubergine of many variations, courgettes, cauliflower - potatoes and, of course plates of chips. 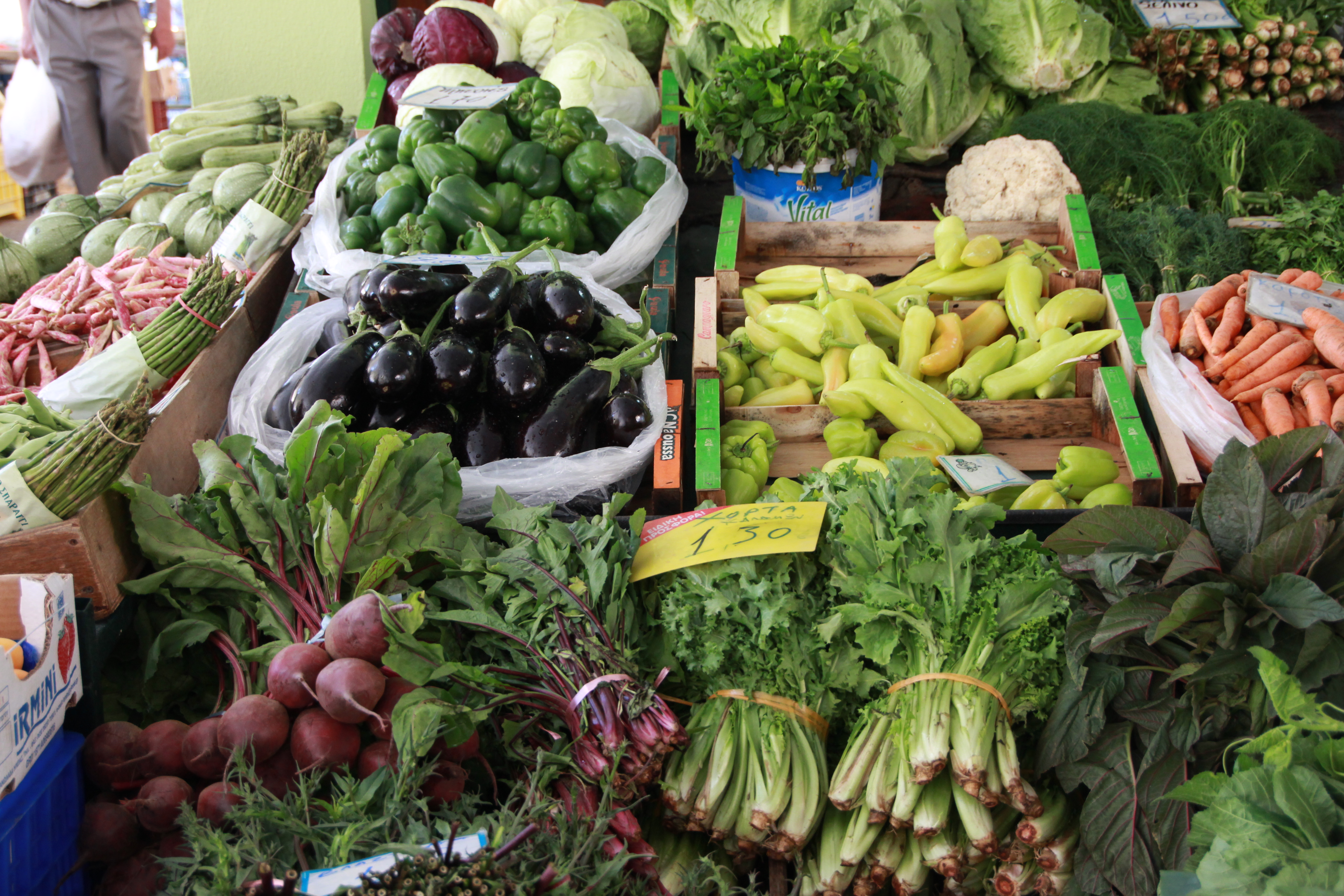 The market at Kastania 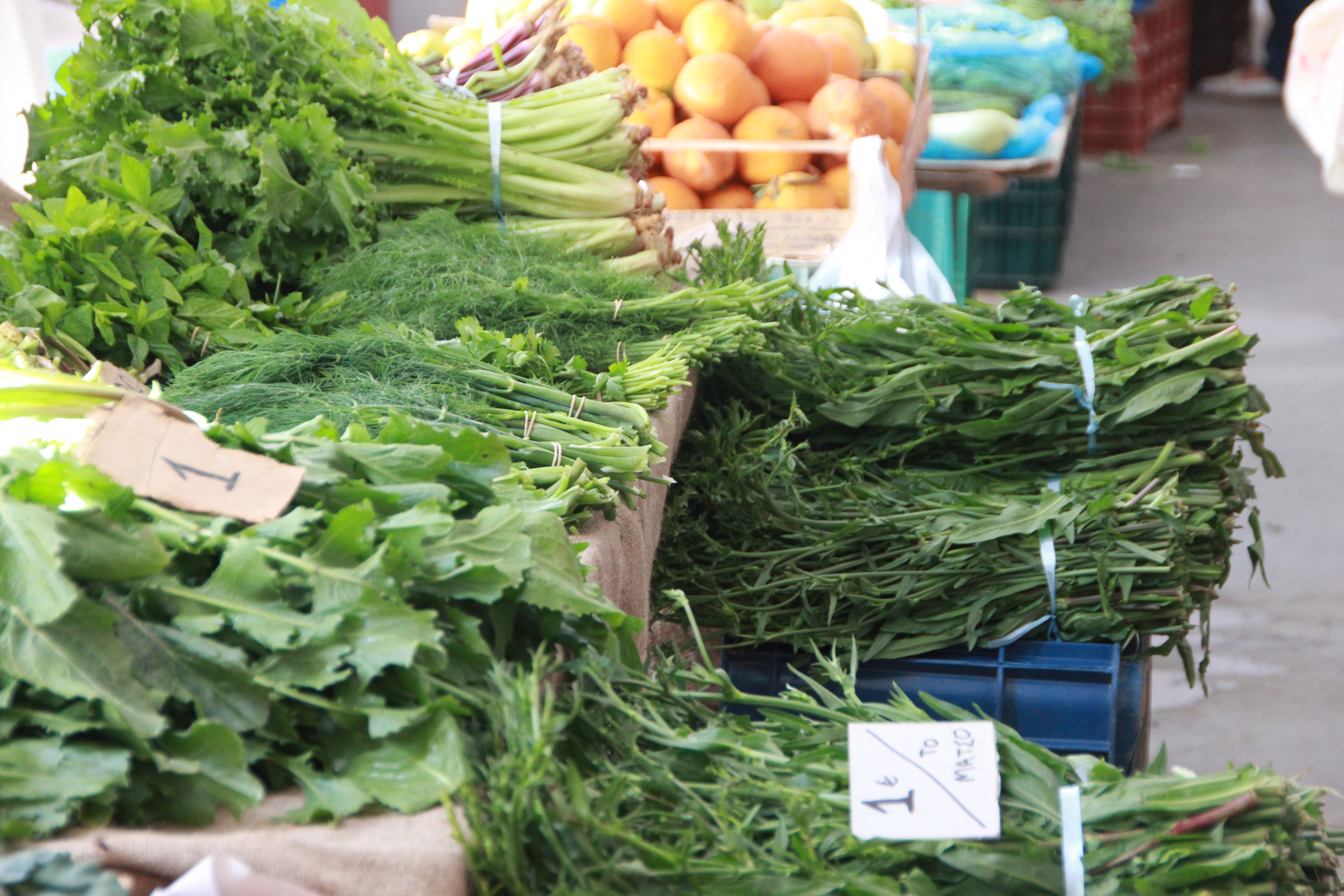 Our partner Kerry Kousiounis ran a restaurant before decamping to the Mani and he is always happy to share his recipes. There is always a choice of salad, some mixed with fresh herbs, the traditional Greek salad with renown Kalamata olives and feta in or on there side or why not try a Mani salad of potatoes, oranges, capers, Kalamata olives and herbs tossed in a light dressing. Tavernas typically use olive oil made from the fruit of their own olive trees, the first press emerald green when eaten with local sea salt and bread, is a meal in itself. Remember - Greeks tend to share dishes which are usually huge so some tavernas offer half portions – check this out before you order otherwise you might have to struggle through half a kilo of tomato salad if eating solo or just with one companion.

The Greeks are not great breakfast eaters preferring to start the day with coffee eating something sweet or savoury later in the morning over another coffee. There are endless pies including feta and spinach and a wide variety of pastries and cakes steeped in honey. Breakfast is, of course, available for those who want it offering amazingly creamy yoghurt, nuts and local honey (the mountains and coast are punctuated with hives), free range eggs cooked a variety of ways, cheese, more olives and bread. We must mention the amazing non acidic orange juice and lemons.

Transporting citrus fruits such as lemons in cold containers alters the alkaline in the fruit to acid, so expect to enjoy a healthy boost of vitamin C during your stay. For a snack try lalagia a sort of sweet or savoury donut crossed with a bread stick. Ancient Greeks ate zea (spelt) preferring to feed wheat grain to livestock. Alexander the Great fed his army on zea because it was believed it made his soldiers more energetic whereas wheat resulted in sluggishness. Zea was a widely grown crop until the 1930 when wheat dominated due to higher yields. For the gluten intolerant visitor spelt bread and one or two other gluten free products are available from a few supermarkets in Stoupa and Kalamata but most food consumed is what is produced locally: still there is something for everyone. For cheese lovers there is a great choice from feta served alone as accompaniment to a meal smothered in dried oregano and olive oil, sfella made from sheep’s milk and fried/grilled mountain cheese (staganaki) – hugely calorific but not to be missed. There are also a range of other Greek cheeses available in the shops and markets.

Kalamata has a market every Wednesday and Saturday farmers bringing whatever is seasonal in addition to fish, cheese, meat, plants - see Wendy and Kerry choosing the week’s food. Areopolis has a smaller morning market on Saturday offering mainly vegetables, plants, olives, fish, live chickens, cheese and locally made soap by the block. Local producers also sell to supermarkets and travel the villages selling their produce off the back of a pickup truck. 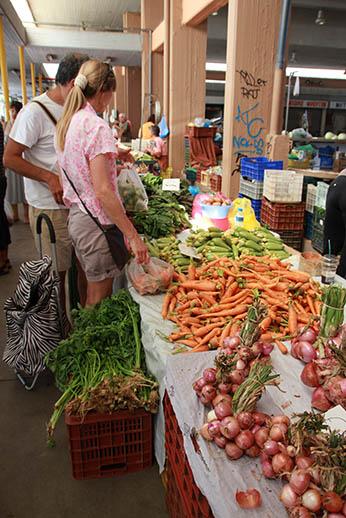 Wendy and Kerry at Kalamata market