For the Byzantine enthusiast, Kastania (sweet chestnut) is a must.  It has 10 churches, accessed via steep narrow alleyways, dating mostly from the 11th and 12th century, three of which are confusingly called Agios Nikolaos.  In the 18th century Kastania was reputed to be  the largest village in the Mani, understandably so, given it’s advantageous location. It nestles at 600 metres elevation in a blind valley at the bottom of the Taygetus mountains. It has many streams and springs that provides a unique climate supporting chestnut, oak, fig and olive trees, walled fruit and vegetable gardens and prolific carpets of wild flowers in spring and autumn.

Although not as grand as in its heyday, it remains a lively working agricultural village with two simple yet excellent tavernas and a kafeneon, where local residents enjoy a coffee, beer and something to eat. Every autumn Kastania hosts a chestnut festival when the local residents come together to enjoy music, dance – even the priest - and delicious food including the seasonal roasted chestnuts toasted over massive braziers.

The main platsa towards the bottom of the village  is dominated by the impressive Dourakis family’s five story 18th century  tower that provided this clan with defence during the notorious  Maniot feuds with rivals. The Kitrianaris family tower lies over the mountain pass in the next valley, we pass this later on our walk. Kastania was also the site of refuge during the Ottoman occupation offering safety during the war of independence in the early 1800s, as well as  betrayal.  Reputedly, hero Theodoros Kolokotronis was betrayed to the Ottomans by one Dourakis brother but saved by another.

The surrounding area of Kastania was the scene of later battles.  The 18th century Monastery of Vaidenista over the mountain pass is set at the bottom of an enchanting wooded valley, carpeted with seasonal wild flowers,  owned by another rival clan, the powerful Kardimyli family of Troupakis-Mourtzinos.  This now peaceful valley witnessed battles between the allies and occupiers during the Second World War followed shortly afterwards by the brutal conflict during the Greek civil war and understandably reputedly haunted.

Access to the some of Kastania’s churches is variable dependent on finding the village key holder. One of the most admired is Agios Petros which has been sympathetically restored. It is believed to have been built in the 11th or 12th century, with a Venetian style bell tower more likely to be of 18th century origin. The church has fine examples of carved marble such as the griffin like mythical beast and birds over the doorway and atmospheric good quality frescos.  It has a fine 18th century iconostasis. Visitors should bring a torch to enjoy the interiors to the full.  Also wonderful is the tiny church of Agios Iannis dedicated to St. John the Baptist found at the beginning of the village as we walk in. It too is believed to be from the 11th or 12th century and displays surprisingly well-preserved frescoes including one of Christ being baptised in the River Jordan.

More ecclesiastical delights are to be had outside of the village. As we climb out of the village after our stay, we pass the second square where we find  the village supply of  mountain water and an ancient laundry pool. We zig-zag steadily up the mountain for approximately 1 -1 ½ hours to the Monastery of Agios Konstantinos, believed to date from the 17th century and currently under restoration. It is now mainly deserted and access to the frescos dedicated to the saints of Konstantinos and Eleni rarely  accessible. However, its grounds provide a stunning and peaceful place to rest before continuing up over the pass (1,000m) into the pine and chestnut woods with, yes more breathtaking views. 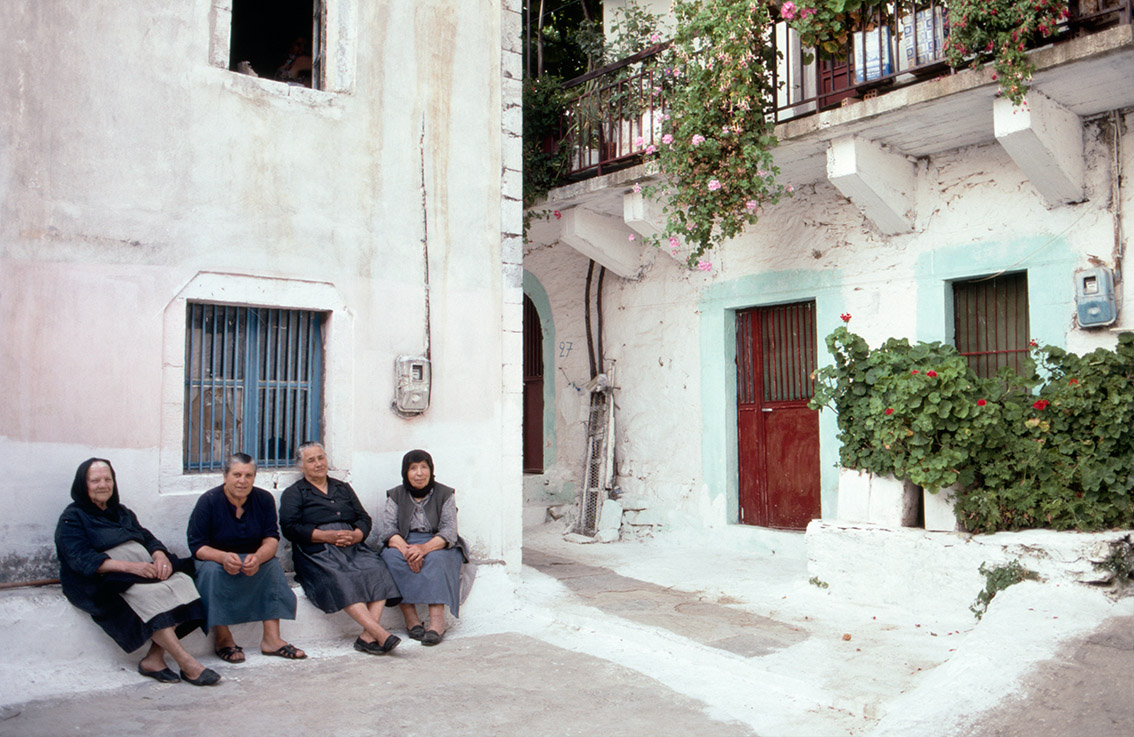 Women in the Outer Mani Village of Kastania in the foothills of the Taygetos Mountains, passing the time of day. ©PETE EASTLAND